The burning embers of the central fire in the traditional Mapuche hut light the experienced yet inquisitive faces of six Mapuche women now embarking on the One Square Meter journey. The hut is filled with smoke and laughter as Marguerita and Amelia wrestle with the huge knitting sticks, which create the base of the artwork. The others (Irma, Marisol, Nina and Anita) sit with Almudena of DehesaLana, at a long table covered with multi-coloured wool samples learning the technique of needle felting. On the fire two big pots filled with leaves boil away as Anita, President of Wallontu Witral, the Mapuche women’s association for traditional handicrafts, stirs from time to time with a long stick. The leaves are making traditional yellow and green dyes that the Mapuche use to colour their wool. A real exchange of knowledge on different methods of dyeing takes place between DehesaLana and Wallontu Witral and the richness of this exchange has already manifested. 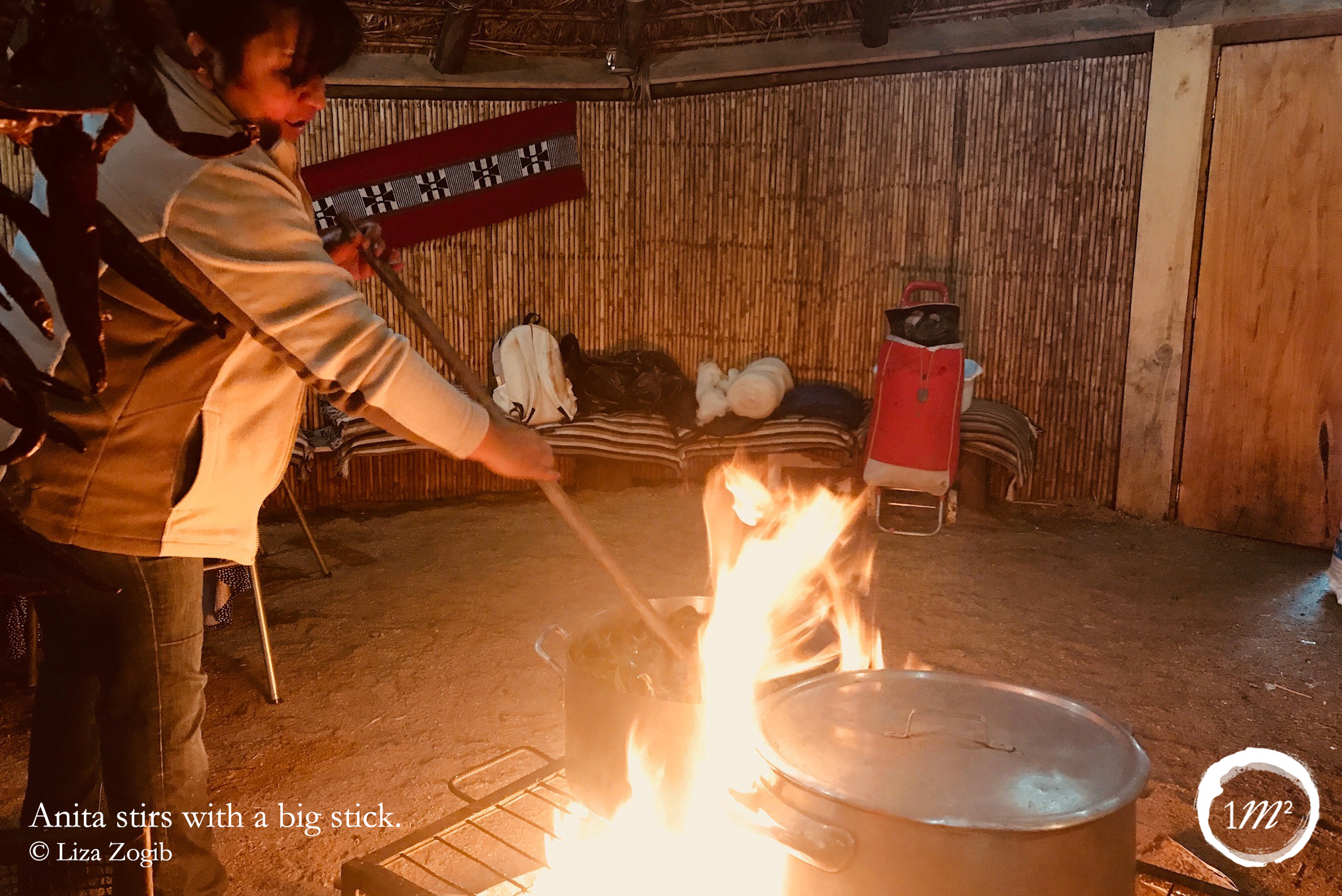 In Chile the plight of the Mapuche people has been a long and bloody one and today strong men and women, like Anita, endeavour to safeguard the traditional and artisanal know how that makes Mapuche culture unique and beautiful. As in so many other cultures, this knowledge is in decline and even within Wallontu Witral, participation has dropped from around 600 women 10-15 years ago to 80 today, due to people moving to the city and the difficulties of making a living from wool. Pastoralism, once central to Mapuche culture, has also decreased substantially but still the long transhumance to the mountains persists in some Mapuche communities. Most, however, now have much smaller numbers of sheep, mainly enclosed, moving from one pasture to another. As a result today there is often not enough wool to go around and the ladies need to source it from elsewhere. The first plant immediately identified by the ladies for inclusion in their art-piece is the Canelo. The Canelo is a beautiful tree with pretty white flowers. While not associated with pasturelands, the ladies felt that this had to be the centrepiece of their One Square Meter since it is the officially recognised plant symbol of the Mapuche community. Naturally, it is considered sacred and is central to religious ceremonies. The Canelo adorns the alters or Rehue/Rewe of the Mapuche god, and particularly on very special occasions like the quadrennial ceremony of Güillatún. This celebration is held both at the end March/beginning of April and again in November to pray for/give thanks for good crops. 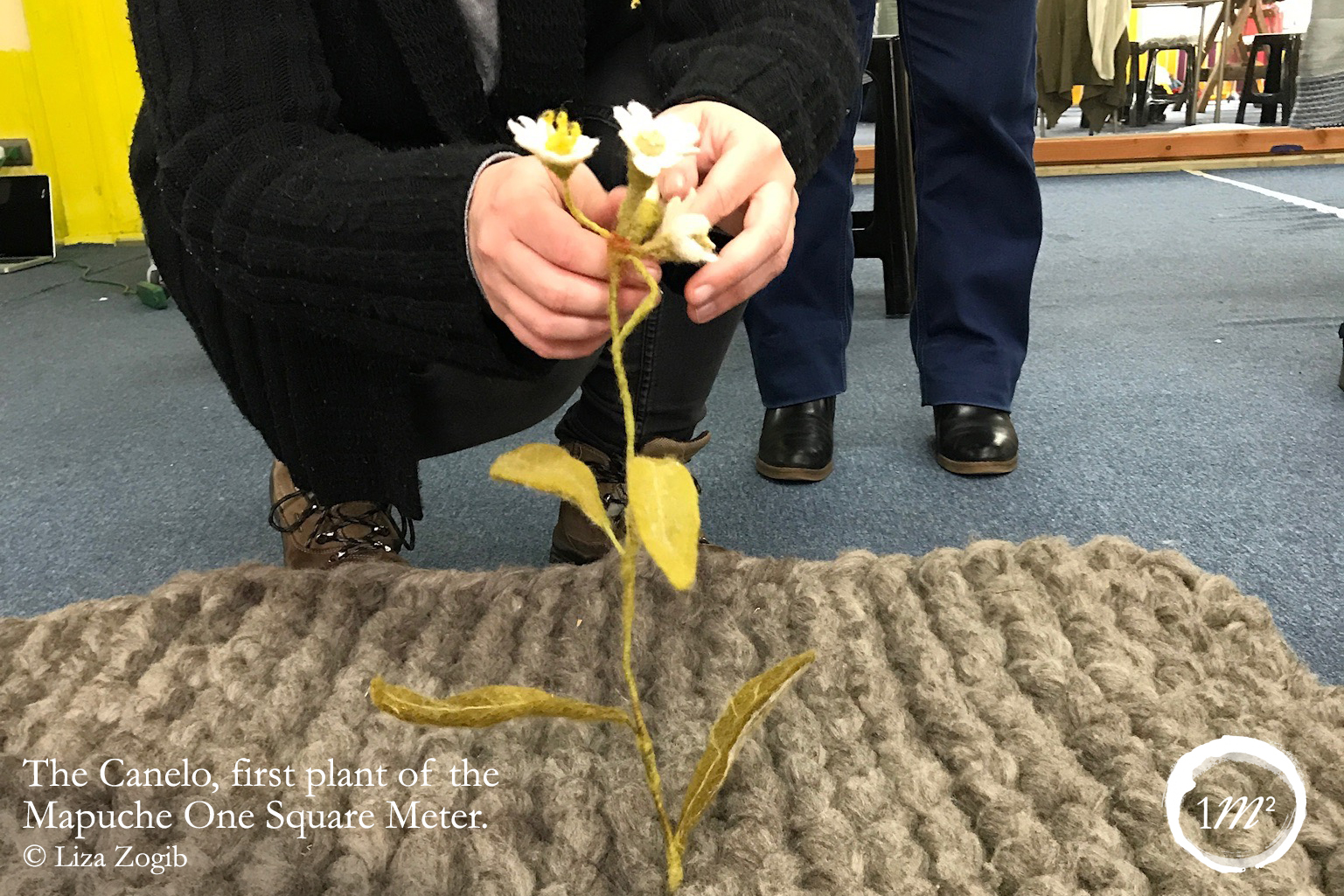 Rehue are constructed in very specific locations and richly ornamented with flowers, branches and leaves. The Canelo takes central stage, just as it will within the Mapuche One Square Meter. Offerings of wheat, torillas and Muday (a corn, wheat or quinoa fermented drink) are laid at the Rehue in offering to the god. People visiting from other communities also bring Canelo to offer. In addition to its spiritual uses, the Canelo is used as a medicinal plant by the Machi, or witch doctors, of the community either by preparing an infusion or a massage lotion. Anita tells us that it can also be used as a natural dye, but says ‘I don’t like to do that’, reinforcing the great value placed on this particular plant by the Mapuche. As the ladies work together on detailing the flowers and leaves, they study even more closely their sacred Canelo, and thus doing create an even more intimate bond with the tree. Our time with the Mapuche ladies has been so rich and we can’t wait to see Anita again very soon at the Communities, Conservation and Livelihoods Conference in Halifax, Canada at the end of May. At the conference we will showcase the progress of the Mapuche One Square Meter in our exhibition and Anita will be working on it Live! Anita will also make an intervention during the launch of our Roads Less Travelled global initiative for pastoralists – as she says, ‘I welcome every opportunity to tell people about our Mapuche culture’. Thank you infinitely Anita, Marguerita, Amelia, Nina, Irma and Marisol! May your Canelos always bloom. 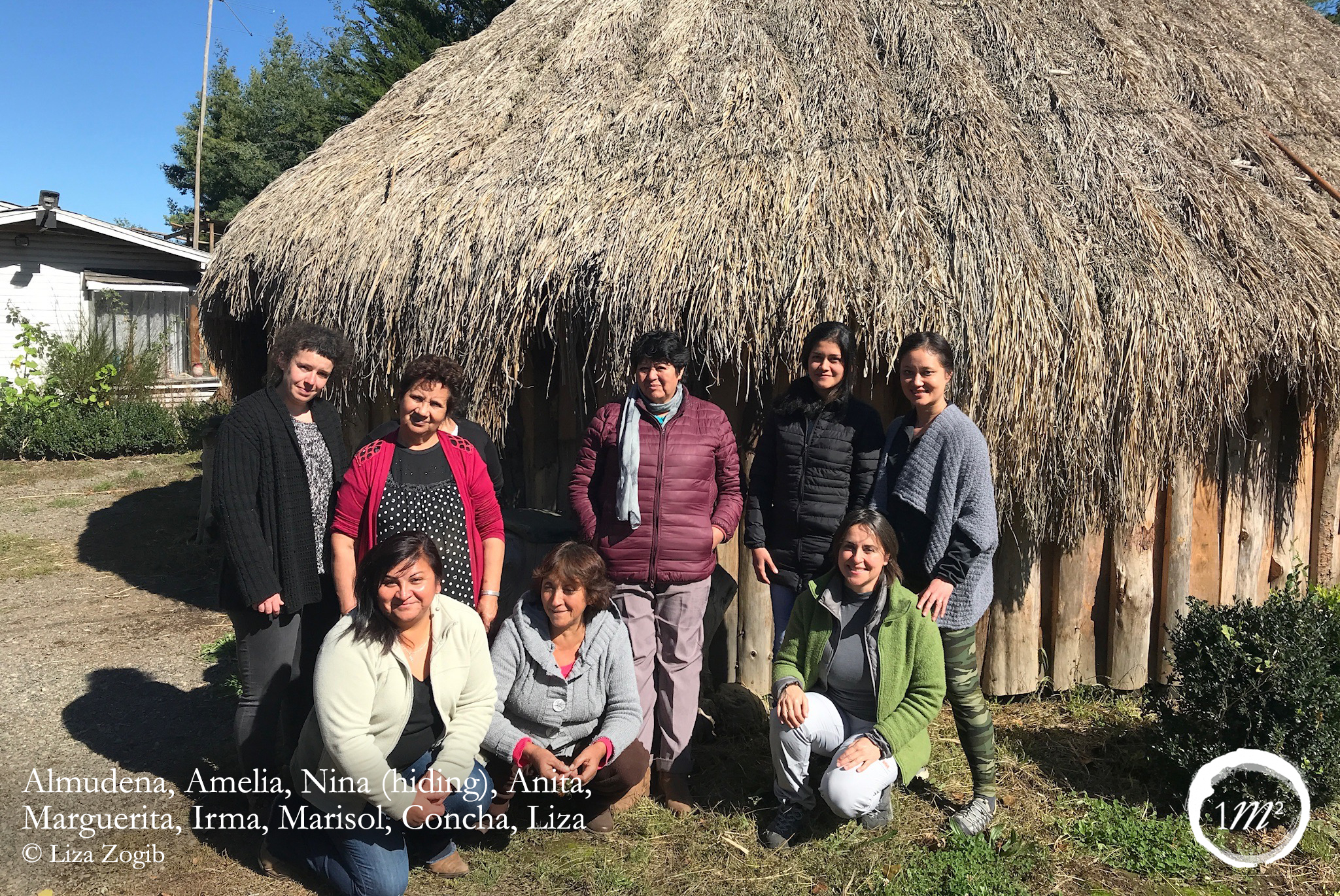 DiversEarth thanks: Anita and all the Mapuche team for their warmth and hard work; Almudena from DehesaLana, Extremadura, Spain, for her tireless and compassionate teaching; Concha – or Concepcion – of Trashumancia y Naturaleza, Spain, for continued support to One Square Meter and friendship; IUCN CEESP for financial support